RUSH: Here is Ron in Bend, Oregon. Great to have you, Ron. Welcome to the program. Hi.

RUSH: Thank you. Thank you very much, sir. 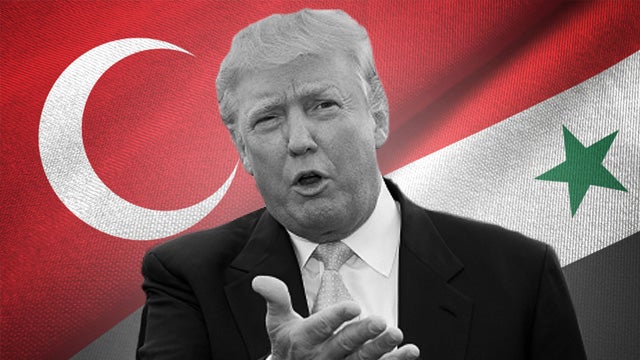 CALLER: Hey, you know, the reason that I and so many other Republicans and conservatives are upset with the president is... I'm not upset with him personally. I'm with him to the end. I'm gonna vote for him next year, and I'm well aware of how evil the people opposing him are. The problem with this is I think this is a terrible mistake, leaving the Kurds behind because there's a matter of military honor here. You just don't leave people who fought faithfully with you behind.

I wish the president would have withdrawn from Afghanistan. That's a pointless war. I wish he had left the faithless Saudis to take care of themselves instead of sending another 2,000 soldiers there. It's just... (sigh) You stand with the people who fight with you, and I think our president's made a mistake. He'll get by this. I'm not gonna believe the lies of the Democrats and I'm gonna vote for him next year, but I'm just very sad at this mistake. But we'll get past it.

RUSH: Well, this is also illustrating -- and I'm gonna respond to you in the monologue segment next hour 'cause I'm down to it on time. But I wanted to get your call in, and I'm glad that you are able to practice the art of brevity. It is the soul of wit. You made your point, and I'll respond to it. But this is illustrating something. From the get-go -- from the first Trump rally in 2016 -- I told you that the only person who can damage Trump is Trump. The media can't take him out 'cause they didn't make him. The only person that can cause himself any harm is Trump -- and this is a small, little microcosm of how it could happen be. Like Ron said, it's not gonna cost his vote, but it could others.

RUSH: Now, yesterday during his press availability with the president of Italy, Trump made a number of excellent points that the media are ignoring. He did not give the Turkish thug leader, Recep Tayyip Erdogan, a green light to invade the Kurdish region of Syria -- and the letter that he wrote proves it! This is the letter Pelosi refused to read yesterday.

She got the letter when it was being passed around. She turned it face down, stood up, pointed at the president, "You're losing your mind! You're melting down! We're outta here!" She didn't even read the letter. She knew what the letter said. The letter makes it clear that Turkey was not given a green light to move in on the Kurds. The second point the president made was that the Syrians and the Kurds and the Turks have been fighting for hundreds of years, which is true. He says maybe we should "let them fight their own wars."

Now, here's the third point. I'm sure many of you are not gonna believe this. What do you think is the number of soldiers that we have pulled out? What is that number? Brian, top of your head, what's the number of troops? What are they making it out to be? (interruption) How many thousand? Two thousand. Right. They want you to believe that we've pulled out divisions, that we're pulling up stakes and we're pulling everything out.

All of this is about withdrawing 50 soldiers. I don't expect you to believe me because it sounds so incredible. Why would anybody have a conniption over this? It may actually be only 28. But we'll go with the number 50. As Trump noted, the troops that he's pulling out were only supposed to be in Syria for one month. They've been there 10 years! Their original deployment called for them to be there a month. This is the original Obama deployment, and Obama sent thousands over there.

This all goes back to Obama's drawing a red line and then flinching when people crossed it. These troops that Trump has withdrawn were supposed to be on the ground for one month. They've been there 10 years -- and the final point. The Kurds have been a very helpful ally in some of the battles. They were paid. They were paid very well. Don't misunderstand. I'm brokering no attacks here, criticism of the Kurds. Again, I just want you to get the truth of this.

It is stunning how there is always an alternative version of from the media narrative that is always true -- and it's so stark that people don't believe the truth. Fifty soldiers have been there 10 years. They were only supposed to be there a month. The Kurds have been very helpful, but they were paid handsomely. Trump noted, "Hey, you know what? These are good guys, but they're not angels." He could have gone much farther.

The Kurds that we're talking about here... You know, this is the friend of my friend of my enemy is my enemy or enemy of my friend or whatever. These particular groups, these Kurds, are radical communist terrorists. They're officially listed at a terrorist organization by the United States and 28 European countries, including the U.K. and Japan. But they happen to be on our side just like we got together with the communists in World War II to oust Hitler, then all hell broke loose when we started divvying things up.

So we have a story here from the Cybercast News Service. The headline: "Trump: ‘Let Them Fight Their Own Wars’ -- President Donald Trump insisted Wednesday that his decision to pull U.S. troops from Syria was not giving a 'green light' to ... Erdogan. In fact, it was the opposite, he said. During a joint White House press conference with Italian President Sergio Mattarella, Trump called out ABC White House Correspondent Jonathan Karl for his question, calling it 'deceptive,' adding that it was 'almost as deceptive' as ABC showing a bombing in Kentucky and misreporting it as bombings in Syria."

And in fact, grab audio... I don't know what the number is on today's roster, but we have this sound bite, and I want to play it for you. It might be number 8. Is it...? Yeah. Grab that sound bite. This is yesterday. This is what the story's talking about. This is ABC's Jonathan Karl. "Mr. President, even after all you've seen, ISIS prisoners freed, all the humanitarian disaster, you don't have any regret for giving Erdogan the green light to invade the Kurds?"

THE PRESIDENT: I didn't give him a green light. No.

KARL: Well, did you tell him and he defied you?

THE PRESIDENT: The same thing as you just... You know, when you make a statement like that, it's so deceptive. Just the opposite of a green light. And when you ask a question like that, it's very deceptive, Jon. It's almost as deceptive as you showing all of the "bombings taking place in Syria," and it turned out that the bombing you showed on television took place in Kentucky. So, you know -- and I'm not even sure that ABC apologized for that. But certainly, it was a terrible thing. I'm looking at this and I say, "Wow, that's pretty bad," and it was in Kentucky. It wasn't in Syria.

RUSH: Right. It was at Knob Creek farm. They played video of an uprising in Knob Creek farm on ABC and tried to pass it off as bloodshed in Syria! And here's the ABC reporter (sniveling), "You think it's really right, you giving a green light to go in there and wipe out the Kurds? How dare you! Who do you think you are!" "Wait a minute, Jon. It's very deceptive question. I didn't give anybody green light. Right there.

"Read the letter I wrote to Erdogan. There's no green light on this." Folks, you cannot believe a single damn thing that you read or hear in the media today! You just... It's stunning! I mean, it's not even close! It doesn't take line-by-line parsing and interpretation. It's just bold and blatant, in-our-faces BS. Now coupled with fake video! Now, the next sound bite, Jonathan Karl says, "You said you withdrew 28 troops."

KARL: (crosstalk) A-a-a-nd look at what's happened since then --

KARL: But -- but look what's happened since those troops were withdrawn and since you had that conversation with President Erdogan!

THE PRESIDENT: You know what's happened? No American soldiers have been killed. That's what's happened. And other people will go in -- and very easy to recapture those people that probably the Kurds let go to make a little bit stronger political impact. And that's okay. I fully understand it. But that's the way it goes. We're bringing our soldiers back home, and we've done a great job. We were supposed to be in Syria for one month. That was ten years ago -- and we've been a police force. It's time to bring our soldiers back home.

RUSH: There you go: 10 years, supposed to be there one month. The president tweeted at 12:40 a.m. today, quote, "I'm the only person," Trump says, "who can fight for the safety of our troops & bring them home from the ridiculous & costly Endless Wars, and be scorned. Democrats always liked that position," they always wanted to be the ones bringing troops home, "until I took it. Democrats always liked Walls, until I built them. Do you see what’s happening here?" the president said.

RUSH: One other Trump tweet about Syria. This is Trump's tweet: "'About 500,000 human beings were killed in Syria while Barack Obama was president & leading for a 'political settlement' to that civil war. Media has been more outraged in the last 72 hours over our Syria policy than they were at any point during 7 years of slaughter.'" It's actually a Buck Sexton tweet, former guest host here, a CIA guy. Trump is retweeting Buck Sexton here.

It's absolutely true! Obama could do no wrong. Obama's drawing red lines and Assad is saying, "Screw your red line!" He's continuing to move in and gas people -- well, slaughter people. Nobody... There was no way Obama was ever gonna get criticized by anybody because of race and because he was historical and because the media thought he was god. But this is exactly right. The results of American war and foreign policy under Obama were dreadfully bad.

RUSH: Mike Pence and Mike Pompeo are conducting a press conference as we speak. They are in the U.S. embassy in Ankara, Turkey. They have announced a ceasefire in Syria. Turkey and the United States have agreed to a ceasefire. That means that Pence and Pompeo went over there and told Erdogan, "Stop it. You didn't have a green light, you know you didn't have a green light, and stop it," and it has been stopped. There is a ceasefire. The Kurds are no longer being fired on. Details as they are made public.