RUSH: You want another shocking bit of news from last night's turnout? In fact, let me find a graphic here. Trump turnout -- and he wasn't even contested -- dwarfed the Democrat turnout in Iowa, and it happened again last night in New Hampshire. In fact, here's a breakdown of some numbers. Trump's record-breaking incumbent voter turnout. If you are an incumbent and you are unopposed, there's no reason to show up other than to show your support. I mean, your candidate doesn't really need you because he's already got the nomination locked up.

Last night 118,774 people showed up to vote for Donald Trump, 118,774. And they found a bunch of them were Democrats, a bunch of them are stealth, they hadn't identified them before. I mean, that number is close to what the turnout was for the Democrat candidates who were actually in a contest.

Trump is dwarfing every previous incumbent president so far in turnout and votes so far in the Iowa caucus and the New Hampshire primary. It equals enthusiasm, and it equals, I think, a very energized level of support. And I think much of it -- not all, obviously -- but a significant percentage of it is driven by the never-ending, ceaseless hatred for Trump throughout the Drive-By Media.

But these are people that want to go back and show the mainstream media or whatever it is that's angering them that it isn't working. There's so much enthusiasm for Trump out there, it's gonna be hard to tabulate. But on the other side, NBC News exit polls showed last night voters between the ages of 18 and 29 made up only 11% of the Democrat electorate, 18 to 29, Millennials, made up only 11% of the Democrat electorate, far below the 19% of 18 to 29-year-olds who voted in 2016. 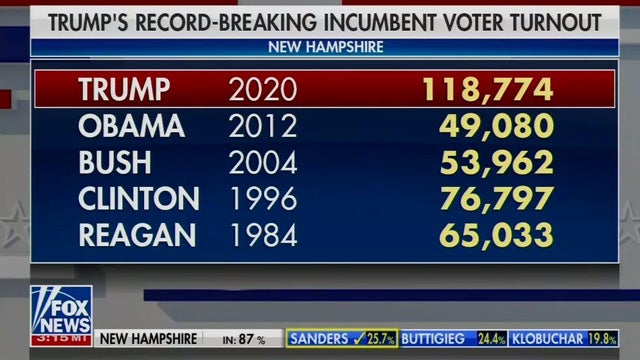 Bernie Sanders percentage of the vote that he got -- I know he was only opposed by Crooked Hillary back in 2016, but it doesn't matter. Bernie Sanders, his support has dropped off the map. He barely ekes out a win last night. He wins, it counts as a win, although Buttigieg is still leading in delegates. But the enthusiasm for Crazy Bernie is even waning. How do you explain that?

Like I said yesterday, the Democrats are offering solutions to problems that no longer exist. And boy, is that ever true of Crazy Bernie.

About The Rush Limbaugh Show