MARK: Yes, America's Real Anchorman is away, as I've said at the start of all these guest hosting stints for 15 years now, America's Real Anchorman is away, playing among the stars on that great radio set in the sky for all eternity, because those radio waves never stop. So three decades of Rush are flying across the galaxies now and forever. And all those early disc jockey shows are up there somewhere too. 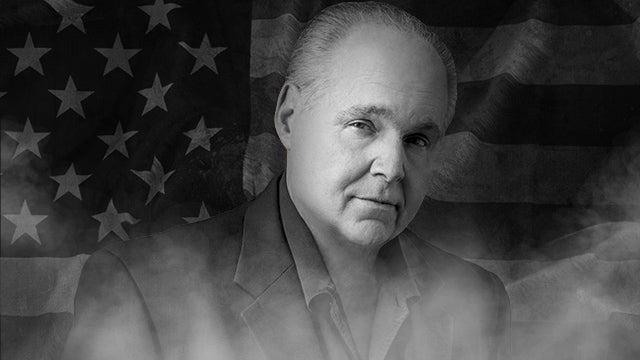 At Ronald Reagan's memorial, the president's dear friend, Margaret Thatcher said, "For the final years of his life Ronnie's mind was clouded by illness. That cloud has now lifted. He is himself again, more himself than at any time on this earth." Rush's mind was entirely unclouded right to the end, as you know if you heard his last show just a fortnight ago, but for this miserable, ghastly, final year, his body was ravaged, and that cloud is now lifted, and he is free of that wasted shell, and in Mrs. Thatcher's splendid words, more himself than at any time on this earth.

And I'm not a theological scholar, so I do not know how it works in the great hereafter or whether they need bumper music of the spheres up there, but I hope Rush's hearing is also restored and the grand old disc jockey can once again listen to all his favorite hits like that spectacular intro to Tom Jones doing "It's Not Unusual" that he especially liked. Rush was unusual, unique, and irreplaceable. Nothing like him in the history of American broadcasting.

Today, just 48 hours after a grim ending we all deep inside knew was coming, we will remember Rush, and we will hear Rush in that magnificent voice, the perfect radio voice. Some of what we'll hear has been picked out by Rush's beloved Kathryn, some by Mr. Snerdley and Ali and others who work on the show, and a couple by me, Mark Steyn. I've been honored to be the guest host here for a long, long time.

If you have a favorite Rush moment of your own, please call us on 1-800 282-2882. We're not going to do Open Line Friday today, but if you have a terrific Rush reminiscence, do let us know. And if you don't get through, no worries, you can leave your condolences any time of the day or night for Kathryn and the family at RushLimbaugh.com. You'll see the tab right there on the homepage above the big Rush Limbaugh banner. And, by the way, we have a very special show for you on Monday, a very special show that you will not want to miss, and I'll tell you more about that in a few minutes.

About The Rush Limbaugh Show